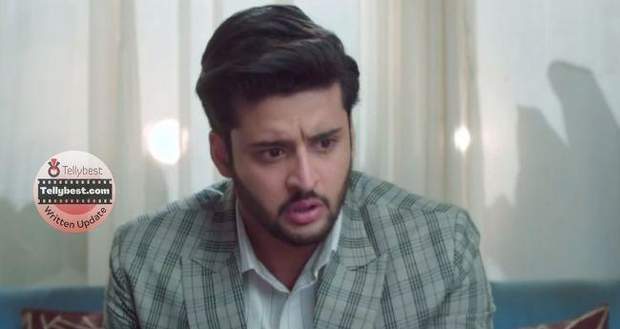 Today's Meet 31st December 2022 episode starts with Meet Hooda asking the terrorist to give back the baby but the Chief asks her to close the door while pointing the gun at the baby.

The police force outside feel disappointed at getting no lead and closing of the hospital's door.

Just then, Meet Hooda tries to motivate the people inside saying that Krishna has taken birth now through their hands and they have to show humanity.

The chief asks Meet Hooda whether she is a girl or a lioness and from where she gets this brevity.

Meet Hooda says that brevity does not see gender while Chanda says that the male terrorist can not see a girl going against them.

Chanda asks the chief to shoot because she is ready to take the bullet for Meet Hooda.

The chief gets stunned and asks his mates to stop while continuously gazing at Meet Hooda.

He says he will give Meet Hooda such a death that she will remember every day.

In the Ahlawat House, Meet Ahlawat fills Meet Hooda's hairline in the photo while the chief wipes Meet Hooda's sindoor in the hospital.

The chief snatches Meet's mangalsutra scattering it into pieces and says his mate will marry her.

The terrorists start dancing while the person with whom Meet's marriage is fixed knows no bounds of his joy.

Meanwhile, Meet Hooda looks at her sindoor and remembers her marriage with Meet Ahlawat while Meet Ahlawat on the other hand pledges to save his wife.

Ragini explains to Meet Hooda that breaking of the mangalsutra does not matter while Meet Hooda says that her bond is very strong with Meet Ahlawat.

On the other hand, Meet A recounts the importance of all the symbols of a married woman and says out loud that he is coming to save her.

Meet Hooda worries that Meet A might take some extraordinary way to reach them and they have to contact him.

However, No. 3 listens to them and asks her whether she is again playing with them.

No. 3 looks lecherously at Meet Hooda and says that he won't kill her. He asks her to get up and sit with other people.

In the Ahlawat house, Babita stops Meet Ahlawat from going with the bag but Raj signals Meet Ahlawat to go behind the excuse of working at the factory.

Later, Babita hand-feeds Meet Ahlawat while Meet Hooda at the hospital says that she is sure that the terrorists must not have cut the telephone line of the hospital and that there must be a phone somewhere.

Babita says that she is getting a weird feeling seeing Meet Ahlawat go and feels as if she should stop him.

In the hospital, the lady goon teases No 3 who is getting married and starts dancing madly.

The Chief asks the doctor about the condition of their commander who will get fine in the next two hours.

She finds a phone and dials Meet Ahlawat who is driving at full speed and does not see the phone.

The lady goon asks No 3 to find his bride and dance with her but No 3 does not find her in the crowd.

© Copyright tellybest.com, 2022, 2023. All Rights Reserved. Unauthorized use and/or duplication of any material from tellybest.com without written permission is strictly prohibited.
Cached Saved on: Wednesday 25th of January 2023 01:47:26 PMCached Disp on: Sunday 5th of February 2023 04:17:39 AM