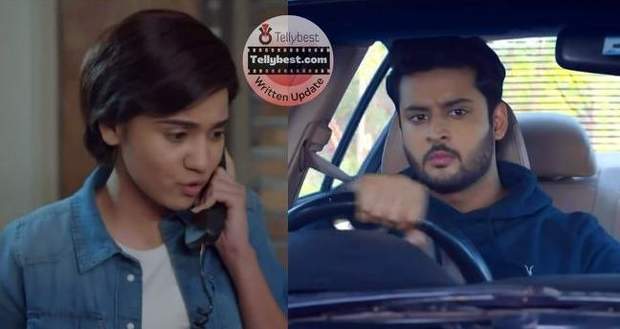 Today's Meet 3rd January 2023 episode starts with Meet Ahlawat groaning in pain after stepping on a nail and injuring his leg severely.

Meanwhile, Meet Hooda’s haldi ritual continues while Chanda asks her to calm down as they have their plan ready.

Meet Hooda signals Chanda to get ready with the haldi and closes her eyes to remind herself about Meet Ahlawat.

Meet Hooda finds herself in a room with Meet Ahlawat standing beside her and asks him how he came there.

Reminding Meet Hooda that he will always appear whenever she thinks about him, Meet Ahlawat smudges a bit of haldi on Meet Hooda’s face.

Meet Hooda asks him why he placed so little on her face to which Meet Ahlawat answers that he shows his affection in a different manner.

Meet Ahlawat grabs yellow marigold petals and showers them on Meet Hooda while she stares at them with an overjoyed face.

Taking her revenge, Meet Hooda runs to get some flowers herself but Meet Ahlawat carries her in his arms and starts rotating making the flowers blast in the air.

Meet Hooda finally pins Meet Ahlawat to the pillar and gently showers the flowers over his head while he slowly closes his eyes.

However, Meet Hooda soon snaps into reality at the voice of No.3 who asks her to dance with them as they are getting married.

Meanwhile, Meet Ahlawat ties his foot with his handkerchief to stop the bleeding and continues walking through the tunnel.

While dancing, Chanda comes to the terrorists one by one and asks them to eat ladoo including the chief.

Before the chief eats the ladoo, he stops as he hears someone’s mobile ringing and discovers the girl’s mobile.

As the girl confesses that it is her mobile, the chief holds her at the gun and asks who Sonu is.

The girl says that it is her boyfriend while the chief reads all the messages between them containing the ladoo plan.

As Meet Hooda’s name arises, the terrorists surround her and the lady starts beating her up.

Ragini tries to protect Meet Hooda but the others drag her away.

In the meantime, Meet Ahlawat reaches the exit of the tunnel and determines to save Meet Hooda at any cost.

© Copyright tellybest.com, 2022, 2023. All Rights Reserved. Unauthorized use and/or duplication of any material from tellybest.com without written permission is strictly prohibited.
Cached Saved on: Wednesday 25th of January 2023 08:29:39 PMCached Disp on: Tuesday 31st of January 2023 06:39:48 PM