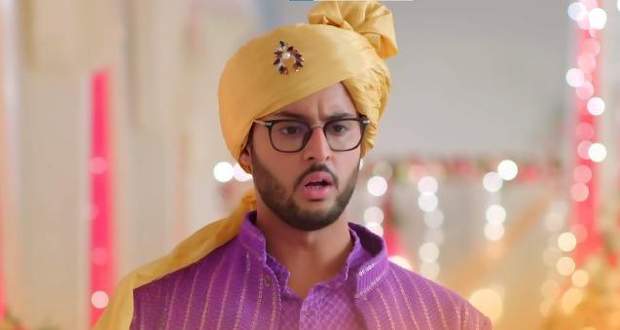 He then tries to open the box and finally unlocks Manjari.

Meet Ahlawat takes her out and she tells him how Barfi Devi trapped everyone into giving dowry.

She asks him to save Isha from all this before it's too late.

Meet takes her along with him and tells the priest to stop the wedding vows.

He asks Deep whether he actually loves Isha or is marrying her because of wealth.

In a firm voice, Meet asks Deep to speak up to which Deep replies that he genuinely loves her and needs no dowry.

Meet Ahlawat tells Deep to tell his mother that he doesn't need any dowry but he stands still.

He then reveals everything to all the family members and clearly refuses dowry.

Manjari tells Isha that she should trust her as she considers her a sister and is fighting for her dignity.

Manjari tells Isha that she should not agree to the demands now as it will keep on increasing in the future.

Manushi feels that it was stupid of her to reveal all this and plans to cancel her deal.

Barfi Devi after getting humiliated announces that she wants to cancel the wedding.

Furious, Meet Ahlawat tells her to do whatever she wants to but they will not marry Isha into a family where people value money more than values and emotions.

She takes Deep along with her, leaving Isha alone.

Ragini and Ram plead with her to not go and that they’re going to convince the Ahlawat’s.

Ram tries to make Meet understand and tells him how much Isha loves Deep.

Meet Ahlawat tells him that nobody else would be happier than her to see Isha happy.

He recalls how they were about to marry her to the wrong guy.

Meet says he is ready to give all the gifts for her happiness but if the family wishes to as blessings, not as dowry.

Meet Ahlawat tells everyone that it’s wrong to get Isha married like this and thanks Manjari for telling him the truth.

Ram furiously blames Manjari for all the mess created today.

Meet Ahlawat tries to make Ragini and Ram understand to which Ragini bursts out.

She says that Meet Ahlawat is giving importance to right and wrong because Isha is not his real sister.

This statement leaves everyone shocked as Meet Ahlawat has always loved Isha as his own sister.

© Copyright tellybest.com, 2022, 2023. All Rights Reserved. Unauthorized use and/or duplication of any material from tellybest.com without written permission is strictly prohibited.
Cached Saved on: Wednesday 25th of January 2023 05:29:03 PMCached Disp on: Thursday 9th of February 2023 08:00:19 AM