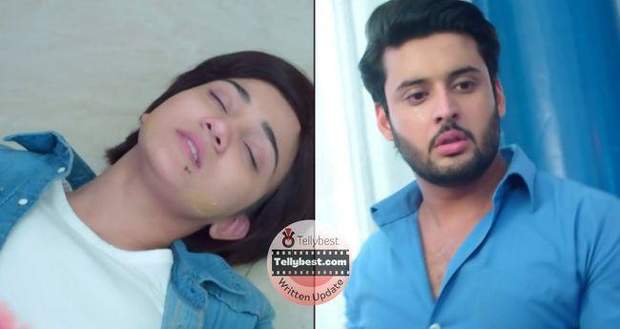 Today's Meet 4th January 2023 episode starts with Meet Hooda taunting Chief and telling him that even the children in her society have more guts than him.

The chief gets angry and tells her to lower her eyes but she refuses which angers him even more.

Further, he tells the hostages that the person to kill Meet Hooda will get to leave the place unharmed.

However, no one speaks up while Chanda and Ragini request the hostages to not get lured in by Chief's fake lies.

The terrorists try to force the hostages to take the gun from their hands but no one does after which Chief drags Ragini forward.

He tells No.2 to record a video of Meet Hooda's death as an example of what can happen if they disobey.

Chief forces the gun into Ragini's hand and tells her to kill Meet Hooda.

However, Ragini refuses and tells the Chief that he can kill her instead.

Meanwhile, the reporters get the video of the gun being pointed at Meet Hooda showing it in the telecast while the police officers also get worried.

On the other hand, Meet Ahlawat comes in front of the terrorists in a warden uniform and tells them that he will shoot the girl.

The girl terrorist drags him into the circle as the Chief demands No.2 to check him.

No.2 finds vermillion in his pocket and makes a joke of him while Meet Ahlawat argues that he came out of hiding as he heard that the person to kill will be freed.

He says that he loves his wife while he takes the gun and points it toward Meet Hooda.

Meet Ahlawat goes near Meet Hooda and whispers something in her ears.

The Chief gets angry and tells him to shoot Meet Hooda.

Further, he sees fear in Meet Ahlawat's eyes and laughs while Meet Ahlawat suddenly points the gun upwards and shoots.

The light goes off while Meet Ahlawat acts scared and gets on the ground.

However, the terrorists turn the light back on as the Chief says that the ward boy (Meet Ahlawat) is a coward.

Meet Ahlawat asks for a second chance while the Chief hands him a gun and points another at his head telling him that he will be killed if he does not kill Meet Hooda.

Further, the hostages get shocked when Meet Ahlawat shoots Meet Hooda near the stomach and blood starts seeping out as she falls to the ground.

The Chief tells No.3 to check Meet Hooda's breathing and No.3 responds that she is dead.

Further, halfway down the hall, Meet Hooda wakes up and tells Meet Ahlawat that his plan worked perfectly while he praises her for holding her breath after destroying the blood bag that was hidden under her clothes.

He takes her "unconscious" body inside a living room and locks it after which they both hug feeling relieved.

© Copyright tellybest.com, 2022, 2023. All Rights Reserved. Unauthorized use and/or duplication of any material from tellybest.com without written permission is strictly prohibited.
Cached Saved on: Wednesday 25th of January 2023 09:41:30 AMCached Disp on: Tuesday 31st of January 2023 06:22:54 PM