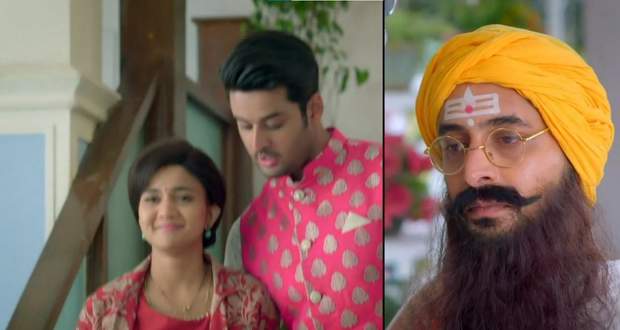 Today's Meet 4th June 2022 episode starts with Isha giving Meet Hooda dark chocolates but Babita takes them from her saying that she shouldn't eat that.

Later, Paramji and the chela's arrive at the Ahlawat house, and Meet Hooda does their pooja to welcome them as one chela informs them that Paramji has taken a Monvrat for the day.

In reality, Paramji and the chela's are no one else but Shantanu and his goons in disguise as they have kidnapped the real Paramji and his chela's.

Later, Shantanu scares Isha by putting a fake cockroach in front of her.

One of the goons tells the family that they will make Meet Hooda do the pooja at 11:30 and till then they would like to rest.

Once inside their room, Shantanu tells the goons to do what they have planned.

The goons go around the house and start opening the circuits around the switchboards and putting them in the plants and water buckets nearby to electrocute Meet Hooda.

Elsewhere, Meet Hooda's earring falls under the sofa while Meet Ahlawat offers to bring it out for her.

However, he gets stuck under the sofa, and Meet Hooda helps him while being amused by his situation.

Shantanu worries thinking that they have found out about him escaping from the rehab center by bribing them but the constables leave without informing Babita about anything.

Later, during the start of the pooja, Babita tries to put a nazar ka tilak on Meet Hooda.

However, Meet Hooda stops Babita saying that no one lets her even consume anything black for the fear of the baby being born dark-skinned.

Babita realizes Meet Hooda's intention and allows her to consume dark chocolate and black coffee from now on.

© Copyright tellybest.com, 2020, 2021. All Rights Reserved. Unauthorized use and/or duplication of any material from tellybest.com without written permission is strictly prohibited.
Cached Saved on: Monday 3rd of October 2022 03:16:04 AMCached Disp on: Thursday 6th of October 2022 04:40:19 PM