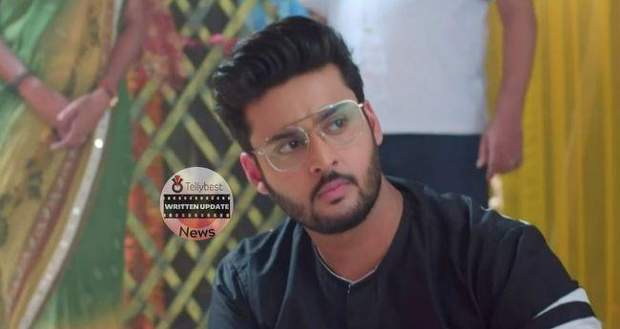 Today's Meet 4th October 2022 episode starts with Meet Ahlawat telling 'Barfi Devi' that he knows she is angry but Neelam will tell Isha if the truth is out and that he cannot bear to see Isha hurt.

Just then, someone comes his way and he stops talking while Meet Hooda disconnects the call thinking that Isha is directly related to all the drama happening.

On the other hand, Meet Ahlawat gets a call from Neelam and he doesn't pick up thinking that he needs to talk to Barfi Devi first.

However, the call comes a second time, and Meet Ahlawat picks it up.

From the other side, Barfi Devi tells Meet Ahlawat that it is her speaking and that someone sent a gift with vermillion and a love letter to Isha claiming to be Deep.

They both converse while Barfi Devi reveals that her phone has been missing for a couple of days.

Meet Ahlawat reveals that he was talking to someone from her call and gets shocked.

Barfi Devi states that someone is planning against them while Meet Ahlawat states that they have to find this person soon.

Barfi Devi tells Meet Ahlawat to find out who stole her phone and disconnects the call.

Elsewhere, Neelam talks to herself in the third person and with a different accent saying that Neelam's husband left her alone and went on that Tirth Yatra with Meet Hooda.

Further, Neelam states that she is angry with Isha for pushing her today and will take revenge in a way that will worry both Meet Ahlawat and Barfi Devi.

Barfi Devi calls Meet Ahlawat and tells him that she thinks it might be Meet Hooda and that they should inform the police.

However, Meet Ahlawat refuses stating that Deep's death will be revealed if they go to the police.

Just then, he bumps into both Meet Hooda and Pooja.

Seeing the bag of medicines, Meet Hooda and Meet Ahlawat accompany Pooja into the room while she gets worried.

However, Kamal is sitting with a cut on his hand seeing the couple leave.

Further, Kamal puts antiseptic on the wound on his leg and tells Pooja that they will have to lay low for some time.

At night, Babita talks about Raj to Meet Ahlawat while he states that Meet Hooda deserves Raj's affection and trust.

Just then, Meet Ahlawat realizes that Barfi Devi's phone must be in the Tirth place and thinks to find out if Meet Hooda has it or not.

Later, Meet Ahlawat is thinking on the matter while he forms a plan and sends a message to Barfi Devi's phone stating that he will send a letter to Neelam telling her the whole truth.

Further, Meet Hooda sees the phone and gets worried seeing that it is switched off.

© Copyright tellybest.com, 2022, 2023. All Rights Reserved. Unauthorized use and/or duplication of any material from tellybest.com without written permission is strictly prohibited.
Cached Saved on: Monday 21st of November 2022 07:45:28 AMCached Disp on: Tuesday 6th of December 2022 02:09:29 PM