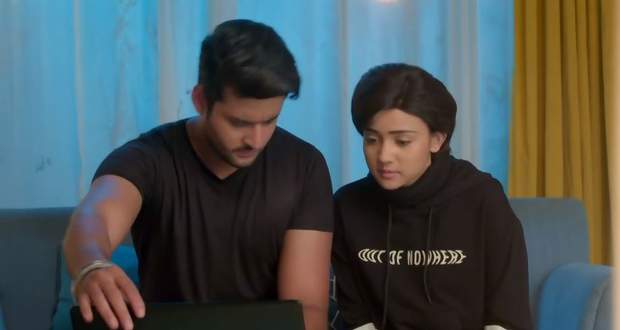 Today's Meet 6th May 2022 episode starts with Shantanu telling Isha that he has brought a gift for her and squeezes her injured her to make her accept it.

Fearful of Shantanu's outrage, Isha opens the box to see a cockroach and cowards away in fear.

Meet Hooda hears Isha's shouts and feels worried for her.

Shantanu acts crazy and tells Isha that the cockroach is the symbol of their love.

Further, Shantanu tells Isha to catch the cockroach and bring it to him with respect if she wants to save her father, Ram who is a killer.

Being afraid of cockroaches, Isha pleads with Shantanu but he gets angry and further connects the Pendrive to the laptop and makes her watch the video of Ram shooting Ashok.

Shantanu blackmails Isha that he will show the video to Meet Hooda who is a very wise police officer.

Isha catches the cockroach with struggle after which Shantanu leaves to get his dose of entertainment.

Isha cries seeing the video when suddenly Meet opens the door to her room.

Isha gets startled and immediately closes the laptop while Meet tells holds her hands and says that they should leave.

However, Isha refuses to do so thinking that Abhay and Shantanu will get Ram arrested if she leaves from there.

Meet realizes that there is something in the Pendrive and steals it before leaving.

As Meet Hooda is leaving the Rana mansion, she gets caught by Shantanu as he drags her to the hall where he and his friends are drinking.

Shantanu demands her to drink but she refuses by throwing away the glass.

Shantanu blackmails her by saying that he will punish Isha if she doesn't do what he wants and gives her a joker costume.

Shantanu starts a video recording on his phone as Meet comes there.

He makes her do tricks while she breaks bottles of glass and makes Shantanu fall on them injuring his head.

Meet smugly looks at him and tells his friends to take him to the hospital while she deletes the video from his phone.