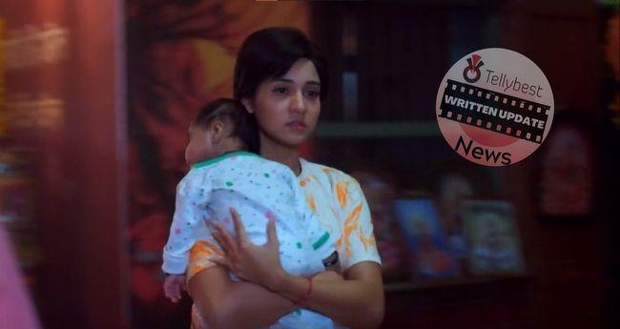 Further, Barfi Devi picks up calls and he tells her that Meet Hooda is the one who has her phone and asks her if she found out about the person who sent the gift to Isha.

Barfi Devi recalls Neelam’s new Layla personality telling her how she wants to ruin Isha by telling her about Deep’s death.

Meet Ahlawat tells Barfi Devi that he will return as soon as he completes the pooja for the peace of Deep’s soul.

However, Barfi Devi tells him to do the pooja without any worry and disconnects the call thinking on how to tell her that the culprit is Neelam only.

Later, Meet Ahlawat is going the pooja for Deep’s soul and puts his picture and the pen that Isha had gifted Deep near the havan.

Elsewhere, Meet Hooda wonders where Meet Ahlawat is and goes out of the house with the baby to find him.

On the other hand, Meet Ahlawat puts the paper bowl with the pen on the balcony as per the panditji’s instructions.

Meet Hooda passes by that place and the pen falls from there just then and lands near her.

At the same time, Kamal waits disguised as the rickshaw man for Meet Hooda hoping to steal the baby.

Meet Hooda recalls the pen as the one she found at the hospital and looks towards the balcony of the temple.

Back at the Ahlawat house, Neelam comes into Barfi Devi’s room with the pooja thal and goes near Barfi Devi.

Barfi Devi angrily upturns the thal and grabs Neelam by the knife asking her to accept the fact that she was at home only in short clothes and drowning in alcohol.

However, Neelam keeps refusing the accusations innocently as if she has no idea about what Barfi Devi is telling her.

On the other hand, Meet Hooda sees Meet Ahlawat doing pooja and questions him while he hurriedly throws Deep’s photo and the cloth with Deep written on it into the fire.

Meet Hooda tells Meet Ahlawat everything she knows about the pen having relation to Isha and the person who died due to the accident caused by Isha.

Meet Ahlawat still refuses to accept the truth and lies that he was just doing the pooja for his baby.

As a last resort, Meet Hooda calls Raj when Meet Ahlawat snatches the phone and argues with her.

During this commotion, Kamal gets hurt in the leg and the injury starts bleeding.

Meet Ahlawat stops Meet Hooda and tells her that he would have told her the truth if he could and requests her to not go to Raj.

© Copyright tellybest.com, 2022, 2023. All Rights Reserved. Unauthorized use and/or duplication of any material from tellybest.com without written permission is strictly prohibited.
Cached Saved on: Monday 21st of November 2022 06:54:31 AMCached Disp on: Tuesday 6th of December 2022 01:57:39 PM