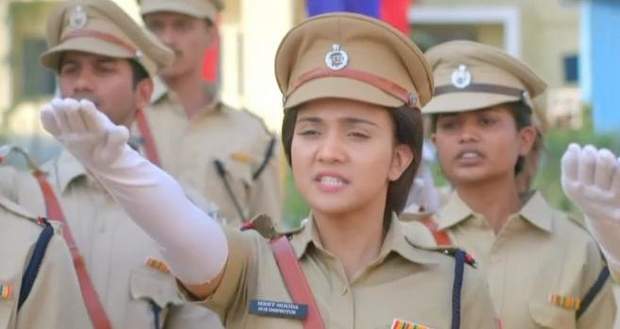 Today's Meet 7th April 2022 episode starts with Meet Hooda marching to the stage in police uniform. She rekindles Ashok Hooda's past remarks about her becoming a proud police officer.

Anubha and Dadi cry out of happiness while Meet Ahlawat states that his girlfriend(Meet Hooda) looks hot in her uniform.

He instantly regrets saying it loud as he earns glares from Anubha and Dadi.

After receiving the gun and certificate, Meet Hooda rushes toward Anubha and hugs her tightly.

Anubha assures Meet Hooda that Ashok Hooda will always stay with her and guide her in the right direction.

Meet Hooda pins the brooch on her uniform with a proud grin winding on her face.

The whole family salutes Meet Hooda with love and appreciates her.

Babita reveals about the surprise party

Later, Babita tells Meet Hooda about the family members missing her and asks her to pack her bags to return home where a surprise party is awaiting her.

Meet Hooda asks everyone to leave for lunch as it might take some time for completing the formalities.

Meet Ahlawat suggests waiting for Meet Hooda, hoping that they could spend some quality time together. Babita playfully teases him.

The rest of the family returns home.

Meet Hooda's excitement for the party

Meet Hooda is thrilled about the surprise and asks Meet Ahlawat, but he refuses to say.

Meet Hooda says that she was thinking of giving Meet Ahlawat a tight hug to which Meet Ahlawat tells her that he will pose like Shahrukh Khan and asks her to run like Kajol to hug him. But she refuses to hug him until he reveals his surprise.

Meet Ahlawat waits for Meet Hooda in his car dreaming about his beautiful wife(Meet Hooda) in a sari.

Much to his dismay, she enters the car wearing her uniform. Both of them playful bicker and flirt with each other enjoying their time.

Meanwhile, the family is busy making preparations for the surprise party.

Babita and Raj return home and finds Isha awaiting them. She asks about Meet Hooda to which Babita informs her that she's on the way.

Meet Hooda and Meet Ahlawat stops in a street to drink tea.

Meet Hooda to the rescue

An old man approaches for help. He tells Meet Hoods about his car dealings with a man named Manoj and his pending payment.

Hence, Meet Hooda makes up a plan and changes her uniform in the car.

Meet Ahlawat marches toward Manoj's car and portrays his acting skills admiring the car. Manoj opens his dickey and is horrified by witnessing Meet Hooda tied up.