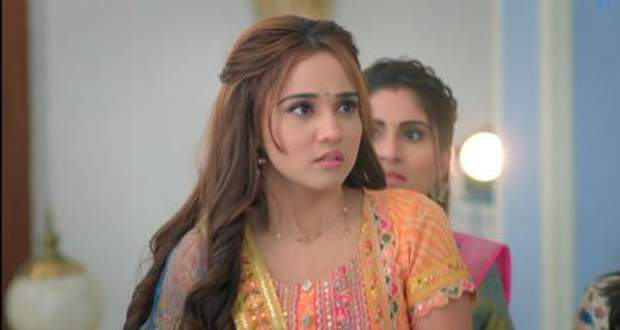 Today's Meet 7th July 2022 episode starts with Isha and Deep discussing how Raj’s health might improve after the coming of Manjiri.

She also mentions how Deep's mom will have to come to talk to her family to talk about their marriage, hearing which Deep gets tensed.

He says that his mother’s thinking is different from theirs, but Isha reassures him that she’ll try her best to impress Deep’s mom.

Meanwhile, the kids of the house bring Manjiri down to ask her to give them a ride on the motorbike.

Meet Ahlawat sees her from the window and thinks that she will definitely ride the bike, but Meet/Manjiri finds it difficult to handle the bike and asks the kids to just click photos of her with the bike.

However, the kids get her to sit on the bike and she falls and ends up hurting herself.

In the house, Manjiri is using her phone and has earphones on when Meet Ahlawat comes up behind her and says there was no need to pretend in front of the kids.

She is practising pretending that she is Meet Hooda, which shocks Meet Ahlawat until he realises that she has earplugs on and she wasn’t listening to him.

While moving fast in anxiety, Manjiri accidentally falls into Meet Ahlawat’s arms and they both have intense eye contact.

As Meet roams around the house carefree, her dupatta falls down from the first floor and lands on Masoom’s face who just entered the house and is shocked to see Manjiri.

With a tense look on her face, Masoom asks Manjiri who she is, to which she replies that she is Meet Hooda, hearing which Masoom faints.

After regaining consciousness, Manjiri tells Masoom that she is not who Masoom thinks she is.

When Masoom asks Manjiri if she was trying to scare her, Manjiri replies that one should only be scared when they’ve done something wrong, which makes Masoom panic.

Masoom recalls the scene in the hospital where Manushi tried to swap Meet Hooda’s baby for a dead child, and how Manushi tried to manipulate Masoom by saying that she would not benefit from telling about this to the family.

Fearing that Meet’s child will become the heir of the Ahlawat family, Masoom gets convinced by Manushi so that she can protect her own sons.

Meanwhile, in the house, Meet Ahlawat tells Manjiri to let Masoom rest and not disturb her.