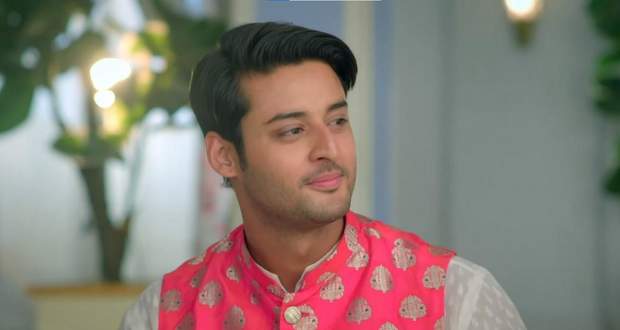 Today's Meet 7th June 2022 episode starts with Babita requesting Paramji (Shantanu) to give her a solution on how to make Meet Hooda calm until she becomes a mother.

Shantanu starts doing fake mantras and makes a pouch with grains which he gives to Babita.

The goon tells Babita that Meet Hooda has to make Khichadi with these grains for 11 days with a lot of instructions like no one can help Meet Hooda or see her while she's making the Khichadi.

Elsewhere, Meet Hooda feels the kick of her baby and wakes up Meet Ahlawat who gets happy saying that his daughter is growing up.

Meet Hooda questions him on why he thinks that it's a girl and not a boy while Meet Ahlawat says that it is just his feeling.

The next morning, Babita gives the grain pouch to Meet Hooda and gives her the instructions.

Meet Hooda has problems making Khichadi while Babita helps her while scolding her.

Elsewhere, the head goon calls Shantanu and informs him that Meet Hooda has put the pressure cooker on the stove and it will soon blast owing to their chemical-infused grains.

Later, the cooker blasts, and Babita rushes inside to see Meet Hooda's legs poking out from around the corner.

Meet Hooda removes the tin barrel from her head and reveals that the cooker blasted without any reason.

Babita tells Meet Hooda that she didn't do the ritual with full faithfulness and says that now Meet Hooda won't be a good mother.

Elsewhere, Shantanu gets angry with the goons and starts destroying the family picture.

However, they get a knock from Meet Hooda who has come with the offering and Shantanu hides the picture behind him as the goon opens the door.

The goon takes the offering from Meet Hooda and makes her leave as Shantanu gets injured due to the glass in the photo frame and screams in pain.

Hearing the shout similar to Shantanu, Meet Hooda goes back to the room but the goon lies that it was him screaming due to his leg cramps.

Later, Meet Hooda gets back her phone and calls the constable to learn that Shantanu has escaped from the rehab center after bribing them.