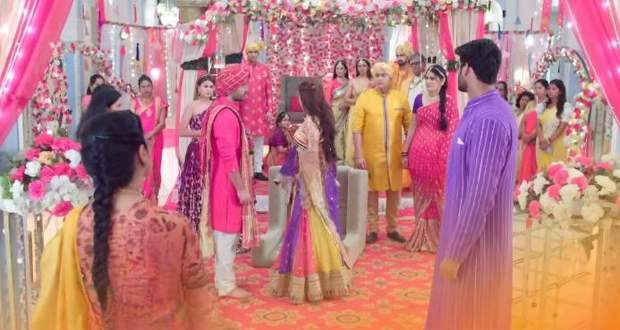 Today's Meet 8th August 2022 episode starts with the Ahlawat’s biding an emotional farewell to Isha and wishes her all the love and luck as she is about to start a new life with Deep.

Raj asks Deep to take care of Isha while Deep tells Ragini to not worry about Isha as he will always take care of her.

The Ahlawats share a very emotional time while biding Isha a farewell as it is hard to hand over your own daughter or sister to another family.

After Isha and Deep leaves, Manjari asks Manushi to resume the deal she made with her.

Manushi agrees and tells Manjari to come the next day for the kid she was asking for Popat.

Manjari asks about the documentation required for the same.

Manushi tells Manjari that it’s a baby boy which her sister delivered and passed away.

Meet Ahlawat drops by, and hear both of them talking about some deal while Manjari can’t wait for tomorrow and is unable to sleep being all restless.

She is excited to finally be able to hold her baby in her hands and cherishes the time she and Meet Ahlawat spend with the baby and gets emotional.

While Meet Ahlawat wonders about the deal between Manjari and Manushi, he wonders what if the deal is actually between Manushi and Meet Hooda.

However, it is hard for him to believe as they both hate each other.

He feels that there must be a solid reason that she joined hands with Manushi and agreed to a deal.

At the midnight, Manjari sees drunk Meet Ahlawat and holds him as he was about to fall, sharing an eye lock.

Manjari tells him not to drink when he can’t handle it.

Meet Ahlawat being emotionally vulnerable talks about the last video Meet Hooda made before breaking her ties with him.

He expresses his disappointment as she left her at the time when he needed her the most in life and how only alcohol kept him sane.

She requests him to quit drinking to which he replies he would if she stops lying to him and admit that she is his Meet Hooda.

He tells her how at the Garba night, his heart screamed that it was his own Meet Hooda.

She feels that he has all the right to know the truth but stops telling him the truth as she is afraid of his reaction and lies about her identity.

In her heart, Manjari promises that tomorrow both his love and child would reunite to start off their new life.