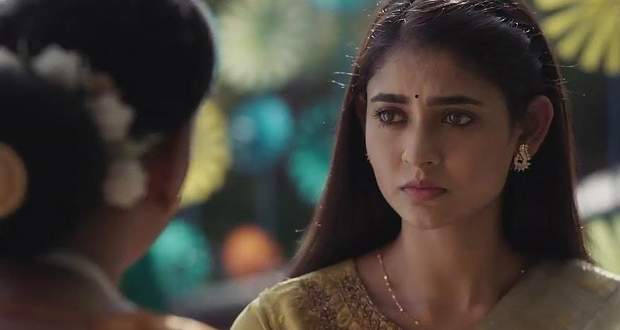 Today's Mehndi Hai Rachne Wali 17 February 2021 episode starts with Raghav Rao telling his PA to spy on the girl whom he saw yesterday.

Pallavi at her loom shop sees Keerthi is being followed by a stranger and goes to approach her.

Pallavi takes a video of the stranger and warns him not to follow or bother her in the future if this repeats in the future she is going to take the video to the police station to file a case.

Keerthi thanks Pallavi for her bravery and they both return back to work.

At the jewelry store, a woman tries to seek Raghav's attention. In the meantime, the spy returns back to the shop.

Raghav gets angry and askes the reason why he is back without completing his mission.

He tells him that Pallavi took a video clip and threatened to file a case and they both decide to find her.

Keerthi is the accountant in the loom shop. While she is going through the accounts she tells Pallavi that all the bills are due if they do not make a good profit this month there is a high chance of the shop getting closed.

Keerthi creates a fake account with profit to show baba but Pallavi feels guilty for doing this.

Deshmukh decides to get Pallavi married. Meanwhile, Sulochana is planning to hide the truth of Pallavi's first marriage.

The bridegroom's family comes to Deshmukh's house to see Pallavi. Everything goes smooth but in the end, Sulochana reveals the truth that she is the daughter-in-law of Deshmukh's family.

The bridegroom's family is in shock and they start to embarrass them for hiding the truth.

Pallavi loses her temper and tells them to stop.