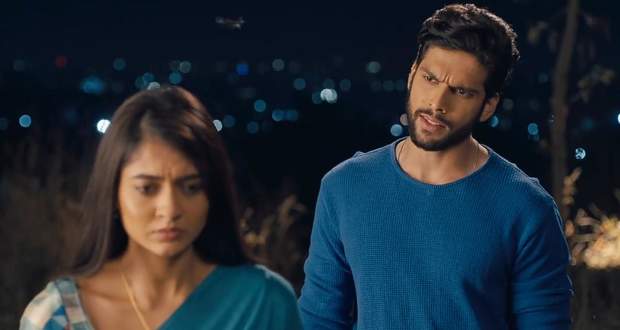 Today's Mehndi Hai Rachne Wali 18 February 2021 episode starts when Pallavi is defending her self-respect in front of the bridegroom and asks them to leave.

Meanwhile, Raghav arrives at Deshmukh's house. He mistakes Amrutha for Pallavi and warns her not to interfere in his matters.

Then he leaves while on the other hand, Pallavi in her room is crying remembering the embarrassment in the morning. Sharda and Vijay console her.

After this Pallavi gets a big order and goes to get the raw material.

As she has due for the past five months, the supplier denies giving her the materials while she manages by giving him some advance.

Now she is not able to afford a truck to take raw materials so she manages on her scooter.

She blocks Raghav's car while he gets angry and knocks over her scooter.

Pallavi’s raw material gets dirt on them while Raghav comes to her and starts to scold her instead of apologizing to her.

Meanwhile, the spy recognizes her and informs Raghav. As he gets to know he warns her.

Now Pallavi loses her temper and she bursts out in anger.

Seeing her arrogance Raghav starts to burn her raw materials despite her pleading.

As the raw materials are burning, he tells her if she bothers her in the future her situation is going to be still worse than the burning looms.

Pallavi is standing in front of the burning looms helpless.