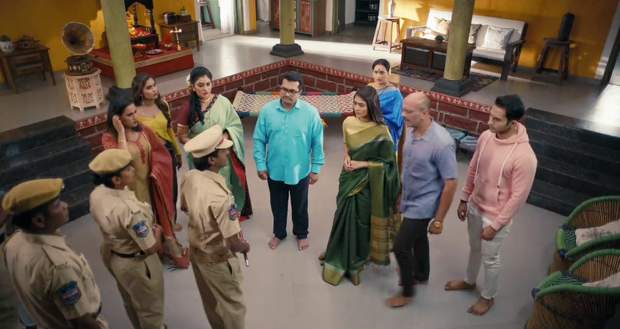 Jagdish's son gives a parcel to Jaya and leaves saying that those are the photoshoot pictures sent by Pallavi.

He call Sulochana and informs her that her job is done amd goes away taking money from her.

Many women come to Raghav's house amd demand Sarees from him while he question who brought them there.

Pallavi announces her arrival and says that she called the ladies while flashback shows Pallavi writing 'Saree Sale Buy 1 get 2 free and Raghav's address underneath on the shutter).

Pahlavi confronts Raghav and leaves with the ladies after getting the shop keys from him.

Kirti and Jaya admire the pictures while police come there and says that they are arresting her as she is going illegal business and that Kirti is involved in it.

They show pictures of Kirti with Jaya's number underneath it and take them to police station.

Raghav gets a call Harish who informs about Kirti and Jaya gettimg arrested.

Pahlavi gets tensed due to finances while Krishna assures her that they will get profit this month as they have less loss.

Pahlavi gets a call from Lawyer who informs her that he has made the stay order against Raghav as she requested.

Elsewhere, Raghav reaches police station and meets Kirti and Jaya after fighting with the Inspector.

Kirti tells him that she didn't do anything while Raghav consoles her.