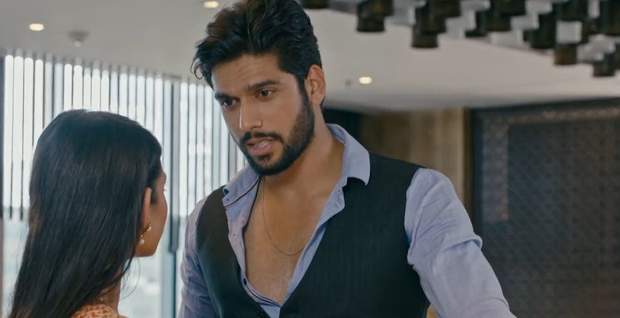 Today's Mehndi Hai Rachne Wali 21 April 2021 (MHRW) episode starts with Raghav talking to an imaginary Pallavi and her saying that she took revenge on him by ruining her sister's reputation.

Raghav throws a knife on the dartboard and asks Jaya on call when were the pictures taken.

Jaya reveals that the pictures were of the day of Pallavi's photoshoot.

The next day, Raghav sweet talks to Krishna and finds out that Pallavi shows fake accounts to the family to hide the losses from them.

He tricks Krishna to help him and she calls Pallavi to meet and inform her that he is waiting for her at a hotel.

He gives Pallavi the transfer papers of the shop to sign which shocks her but she refuses to sign them.

She reads the documents while remembering Vijay's words and gets happy.

She questions him while he again sweet talks to her and says that he is giving her the shop as she won the challenge.

She makes a deal with him that she will give the market price of the shop to him in instalments and signs on the first page of the document as a promise.

She leaves while Raghav says that he will not leave her easily.