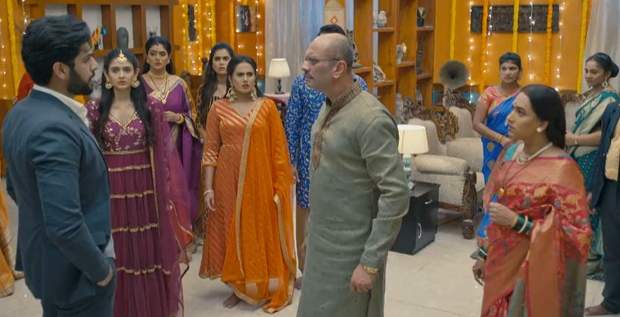 Today's Mehndi Hai Rachne Wali 22 April 2021 (MHRW) episode starts with Pallavi telling the good news to Krishna while Nikhil informs the family that there will be a party that night.

Sharda gets a call from Janakamma and the family goes to her house where they learn that she is going on a Tirthyatra so they are going to live in her house to take care of it.

At night, Raghav is getting ready to go to the party while Farhad tries to stop him but fails.

At the party, the lights go off and Pallavi makes her entry.

She announces that the party is specially organised for Vijay and reveals that she has bought Deshmukh Saree Emporium.

Everyone gets happy while he gets emotional and holds the documents in his hand.

He happily sits and asks her how did Raghav sell it to her while Raghav enters shocking everyone.

He tells everyone that it is a return good for the good times Pallavi showed him which shocks everyone even more.

He touches Pallavi and says that they don't need to hide anything while Vijay separates him from her.

He tricks everyone into thinking that they are together and that she tricked him to get her shop.

He throws money on her and says that those are for the nights they spent together.

© Copyright tellybest.com, 2020, 2021. All Rights Reserved. Unauthorized use and/or duplication of any material from tellybest.com without written permission is strictly prohibited.
Cached Saved on: Tuesday 28th of September 2021 07:08:59 AM