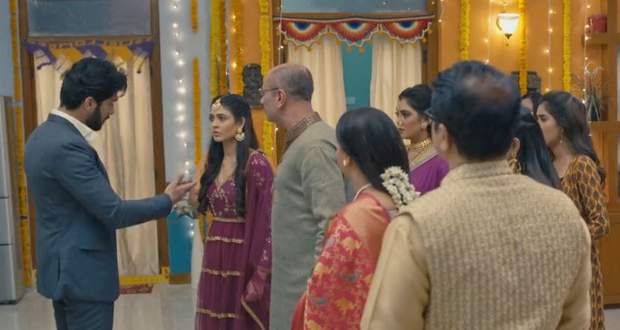 Today's Mehndi Hai Rachne Wali 23 April 2021 (MHRW) episode starts with Vijay slapping Raghav and telling him that Pallavi can never do something wrong and that she can never lie.

Raghav laughs and asks Pallavi if she never lied to Vijay and reveals to everyone that their shop has been in a major loss for the past 2 years.

Pallavi says that he is lying while everyone asks Sharda where the shop documents are.

He shows them the shop documents and says that Pallavi gave them to him while Pallavi gets support from Krishna in revealing that she gave the documents from the lawyer.

Raghav shows them the pictures on his phone and says that the girl is none other than Pallavi.

Vijay gets disgusted by her while Raghav bad mouths her and leaves.

Vijay asks Pallavi if she had been showing him fake bills and she agrees after which he pushes her.

He tells that he is ashamed to call her a daughter and burns the shop documents while saying that she has lost all rights to the shop.