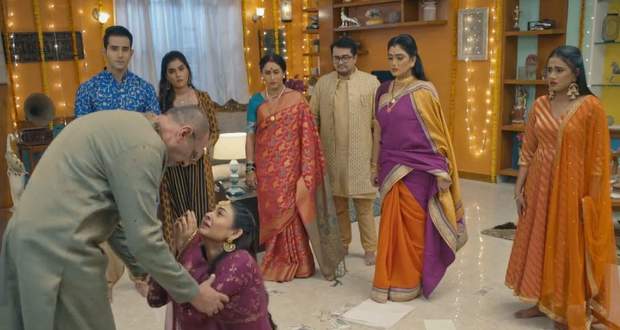 Today's Mehndi Hai Rachne Wali 24 April 2021 (MHRW) episode starts with Pallavi revealing all the things Raghav did to her and Vijay rebuking her for still working with him.

Vijay throws her out of the house and tells her to never come back.

Sharda and Nikhil try to stop him but he slaps Nikhil and closes the door on her face.

Elsewhere, Raghav is drinking while Farhad tells him that he did a mistake by ruining Pallavi's life.

Raghav justifies himself by saying that she started it first by dragging Jaya and Kirti into their game.

Farhad blames him and leaves.

Pallavi cries on the road and blames Raghav.

Meanwhile, Raghav sees the insulting things written on the front of Jaya's house and starts wiping them with his shirt.

He is going home while he stops the car and gets out seeing Pallavi.

Sharda and Nikhil are about to go look for Pallavi while Vijay stops her and tells her that she will see his dead body if she leaves.

He soaks himself in kerosene and threatens to light himself.

Elsewhere, Pallavi questions Raghav and he tells her that he just took revenge.

She promises to ruin his life but he doesn't believe her.

© Copyright tellybest.com, 2020, 2021. All Rights Reserved. Unauthorized use and/or duplication of any material from tellybest.com without written permission is strictly prohibited.
Cached Saved on: Wednesday 28th of April 2021 08:55:32 PMCached Disp on: Thursday 6th of May 2021 06:20:11 AM