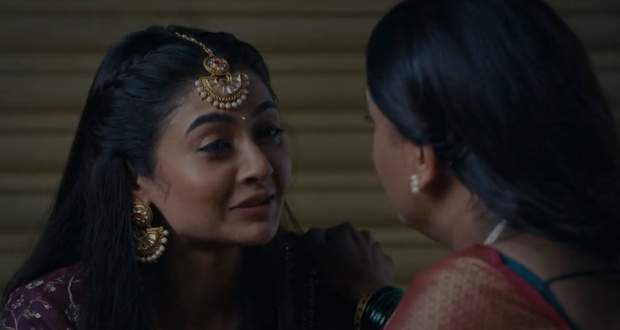 Today's Mehndi Hai Rachne Wali 26 April 2021 (MHRW) episode starts with Vijay threatening Sharda that he will kill himself if Pallavi comes into his house.

Sharda gets angry and asks God if it is always the lady who gets the blame.

She takes Pallavi for example and says that one can live without their husbands while removing her Mangalsutra and Sindoor.

She gives those to Vijay and says that she will always choose her children before him and leaves with Nikhil.

Kirti tells about Pallavi being thrown out and says that she knows where Pallavi might be.

She reaches Deshmukh Emporium with Sharda and Nikhil.

Sharsa tries to convince Pallavi to come back home but she declines.

Pallavi decides to stay with Kirti and they part ways.

The next morning, Pallavi gets a nightmare that Vijay had a heart attack which turns out to be true.

Raghav gives money to a lady in need but the lady refuses to take it saying that she sees sorrow in his eyes.

Sulochana taunts Pallavi and Sharda saying that they are the reason for Vijay's heart attack.

Pallavi tries to talk to Mansi but she rebukes her.

Pallavi gets emotional and tells her that their friendship is over.

© Copyright tellybest.com, 2020, 2021. All Rights Reserved. Unauthorized use and/or duplication of any material from tellybest.com without written permission is strictly prohibited.
Cached Saved on: Saturday 30th of July 2022 06:28:41 PMCached Disp on: Wednesday 17th of August 2022 04:13:37 PM