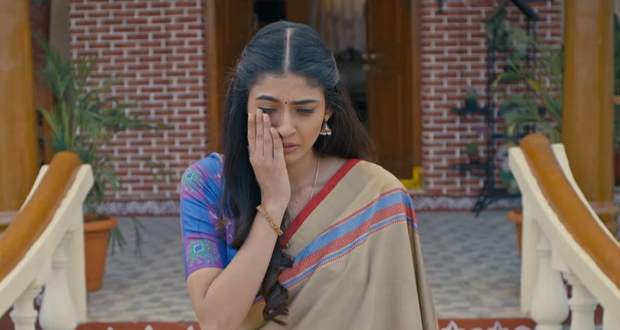 Kirti informs Jaya that Vijay's health is deteriorating and they have to go there. Raghav offers to drive them there.

Pallavi throws rocks at Raghav's car and blames him for Vijay's condition.

Jaya and Kirti overhear them and questions them.

Meanwhile, the nurse informs Sharda that Vijay has to be shifted to the emergency ward.

Jaya tells Raghav to never show his face again and apologises to Pallavi.

Raghav tells Farhad that Pallavi ruined his day and reveals that he bought his old house which he wanted to give to Jaya.

Jaya apologises to Sharda but Sulochana taunts them and Jaya slaps her.

Amrita voices her fear of being caught while Sulochana tells her that she will get Pallavi out of the city before it happens.

Jaya requests Raghav to apologise to Pallavi in front of everyone.

© Copyright tellybest.com, 2020, 2021. All Rights Reserved. Unauthorized use and/or duplication of any material from tellybest.com without written permission is strictly prohibited.
Cached Saved on: Monday 29th of November 2021 10:33:28 AMCached Disp on: Wednesday 1st of December 2021 03:18:26 PM