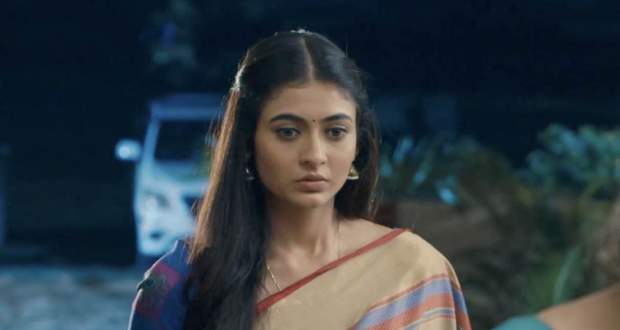 Today's Mehndi Hai Rachne Wali (MHRW) 28 April 2021 episode starts with Raghav rebuking Pallavi and ordering her to leave Hyderabad as he gives her a cheque of 5 lakhs.

Pallavi rushes to the hospital where she sees that Sulochana has refused to give money for Vijay's treatment.

Nikhil gets angry at Sulochana while Pallavi tells them that she has cleared all the bills with Raghav's money.

The next day, Kirti calls Sharda and informs her that Pallavi didn't come home.

Sharda sees her sleeping on the front steps of the house and they get emotional while Jaya and Kirti come there.

Jaya finds out that Pallavi is a widow and gets shocked.

Elsewhere, Raghav is degrading Pallavi while Farhad informs him that she is still in Hyderabad.

Sharda and Jaya talk about Pallavi's past and her marriage with Mandar.

© Copyright tellybest.com, 2020, 2021. All Rights Reserved. Unauthorized use and/or duplication of any material from tellybest.com without written permission is strictly prohibited.
Cached Saved on: Friday 6th of August 2021 03:33:48 AM