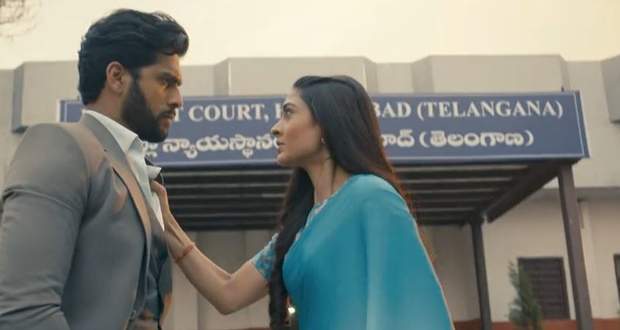 Today's Mehndi Hai Rachne Wali (MHRW) 3 May 2021 episode starts with Raghav taunting Pallavi for having figured out the truth and telling her that she has to marry him in order to get Nikhil's freedom.

Pallavi talks about his family but he puts a hand to her mouth and leaves saying to never inform his family about their deal.

Pallavi gets a call from a distressed Sharda.

Meanwhile, Raghav goes to Jaya's house and tells her that she will be in the house by the next day while Kirti tries to convince Jaya to stop it.

Sharda tells Pallavi that Vijay's health started deteriorating once he got suspicious of Nikhil's whereabouts.

Pallavi tries to argue against the police but fails while Milind informs her that no one is agreeing to take the case.

Later, Sharda tells Pallavi that Vijay is refusing to eat without seeing Nikhil and gets emotional and Pallavi consoles her.

Pallavi meets Raghav and tells him that she is ready to marry him.

© Copyright tellybest.com, 2020, 2021. All Rights Reserved. Unauthorized use and/or duplication of any material from tellybest.com without written permission is strictly prohibited.
Cached Saved on: Tuesday 30th of November 2021 02:10:08 PMCached Disp on: Wednesday 1st of December 2021 03:26:57 PM