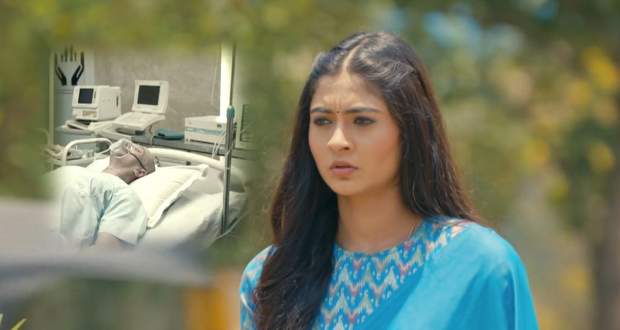 Today's Mehndi Hai Rachne Wali (MHRW) 4 May 2021 episode starts with‌‌‌ Pallavi agreeing to the marriage and Raghav telling her that Nikhil will be released as soon as they get married.

They go on their separate ways while remembering their reason for agreeing to the marriage.

Pallavi tells Sharda that Nikhil will meet Vijay the next morning but hides the marriage news from her.

Pallavi gets emotional and hugs Sharda who consoles her that she will talk to Vijay.

Pallavi requests to take one saree of her as it will always remind her of her.

Meanwhile, Raghav gets angry seeing his closet empty while Farad tells him that he did to make space for Pallavi's clothes.

Later, Pallavi gives the shop information to Krishna and talks to her.

Elsewhere, Farhad tells the inspector to release Nikhil the next day.

© Copyright tellybest.com, 2020, 2021. All Rights Reserved. Unauthorized use and/or duplication of any material from tellybest.com without written permission is strictly prohibited.
Cached Saved on: Monday 17th of January 2022 09:21:18 PM