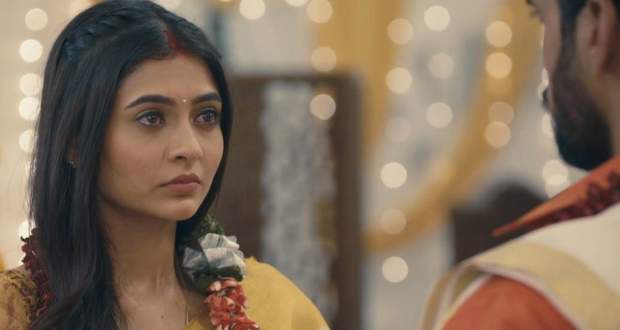 At the same time, Sulochana and Sharda arrive there and question Pallavi.

Sulochaha starts rebuking Pallavi and accuses her of being a gold digger.

Sharda assures Pallavi that she is with her and asks her to reveal the real reason to get married.

Pallavi decides not to speak and doesn’t go back with Sharda.

Sharda leaves while Pallavi performs the remaining rituals with Raghav.

She loses consciousness while Raghav carries her to the room. Jaya comes there and enquires about the situation.

She gets suspicious of the marriage as nobody came from Pallavi’s family.

Raghav manipulates the situation and leaves.

Keerti comes to meet Pallavi while Jaya also comes and shares her own confusion.

Pallavi learns from Jaya that Raghav got married to her because of her and Keerti’s return.

© Copyright tellybest.com, 2020, 2021. All Rights Reserved. Unauthorized use and/or duplication of any material from tellybest.com without written permission is strictly prohibited.
Cached Saved on: Monday 3rd of October 2022 06:18:42 AMCached Disp on: Friday 7th of October 2022 03:29:24 PM