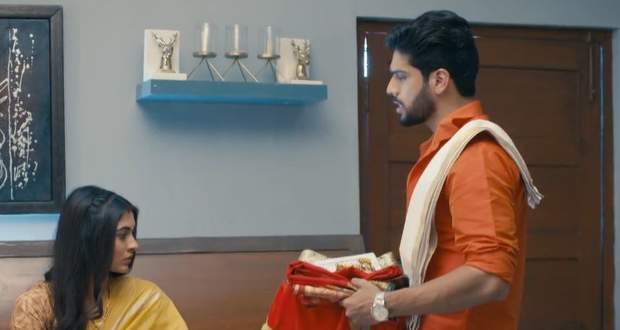 She is about to tell the truth but Raghav comes there at the right time and starts praising her.

He tells her to get ready for that night's party and they leave.

Raghav locks the room and tells Pallavi to not reveal her deal to his family.

Meanwhile, Nikhil tries to get Sharda to eat while Sulochana and Amruta feel happy.

He tells Raghav to give those to Pallavi as she has broken his dream.

Raghav goes to Pallavi and taunts her by reminding her that the shoe is technically his.

The party starts and guests ask for Pallavi while Raghav calls Pallavi and tells her to come downstairs.

She comes downstairs dressed as a widower which shocks everyone.

Raghav takes her aside and tells her to change her dress but gets shocked finding out that she is a widower for the Deshmukh family and not their daughter.