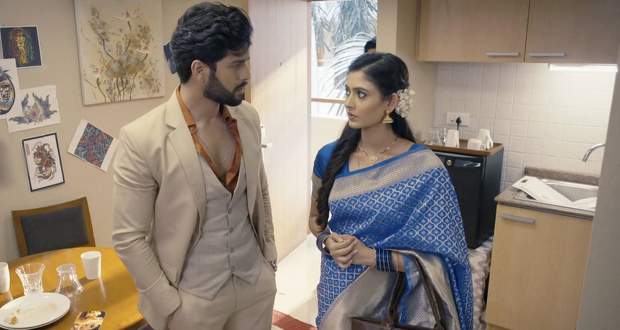 The next morning, Pallavi informs Jaya and Kirti that Sulochana stole the necklace and not Raghav while advising them to not hold grudges.

Meanwhile, Sulochana checks out of the hotel and sits in the taxi while Raghav turns out to be the driver.

He takes her to an empty road and demands her to reveal the truth about how she stole the necklace while pointing a gun towards her.

She reveals how she planned all of it cause she wanted him out of the Deshmukh house.

She reveals she wanted to get the house under her name but always failed because of Pallavi.

He threatens to send her to jail and she begs him to not do it.

Meanwhile, Jaya tells Pallavi that she wants to apologise to Raghav but is nervous and Pallavi offers to help.

Raghav drops Sulochana home and demands her to reveal the truth to the Deshmukh family.

Later, Pallavi dresses up as Raghav and tells Jaya to calm her nerves by thinking that she is Raghav and mimics him.

Meanwhile, Raghav comes home and secretly sees them from afar.

She starts boasting about her stories and exaggerates them but gets silent seeing Raghav.

© Copyright tellybest.com, 2020, 2021. All Rights Reserved. Unauthorized use and/or duplication of any material from tellybest.com without written permission is strictly prohibited.
Cached Saved on: Tuesday 28th of September 2021 12:09:52 AM