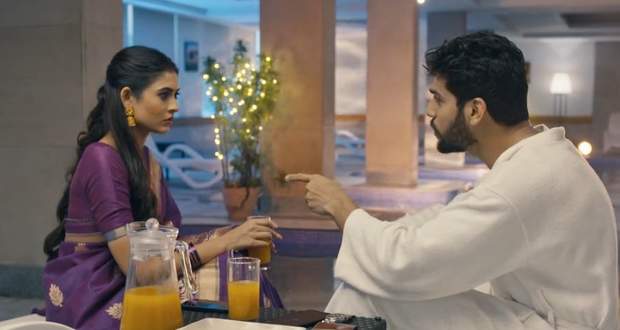 Today's Mehndi Hai Rachne Wali (MHRW) 11 June 2021 episode starts with Pallavi running away from the room while Jaya stops Raghav and apologizes to him.

He talks about his past and says that they have to talk about it while she remembers people breaking into her house and killing her husband and son.

Meanwhile, Sulochana comes home and Milind taunts her for trying to get Vijay's signatures on fake property papers.

She behaves rudely with him and tells him to leave.

Meanwhile, Pallavi and Raghav play a game to see who has better qualities and she wins the game.

She asks him to tell her what happened in the past while he gets hesitant.

However, she tells him to trust her after which he reveals that he had a little brother named Arjun and his maternal grandfather who was a musician.

He says that he used to get bullied as a child for being poor while he used to stop them with his power.

He reveals that his grandfather has breathing problems when Krishna Rao entered their lives.