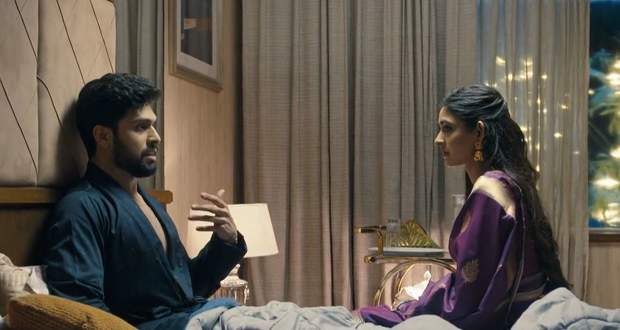 Elsewhere, Kirti tells Sunny to tell her if he can marry her or not as it has been going on for two years and leaves.

Meanwhile, Raghav and Pallavi talk about her husband Mandar while she says that it's time for his story.

Raghav reveals that Krishna Rao used him by making his pawn and to get money from the people of the village.

He reveals the hardships he went through after finding out that Krishna was a fraud and that the village people killed his grandfather and little brother.

He tells her that he lost Jaya and Kirti too as his family the day Arjun and his grandfather died.

Pallavi goes to the hall and gets emotional while Sunny calls Kirti and tells her that he coming there to take her.

He tells her that they will elope and says that he will commit suicide if she doesn't come.

However, Pallavi spots her and questions her while Raghav reaches Sunny's room.

© Copyright tellybest.com, 2020, 2021. All Rights Reserved. Unauthorized use and/or duplication of any material from tellybest.com without written permission is strictly prohibited.
Cached Saved on: Wednesday 13th of October 2021 11:06:29 AMCached Disp on: Friday 22nd of October 2021 09:51:54 PM