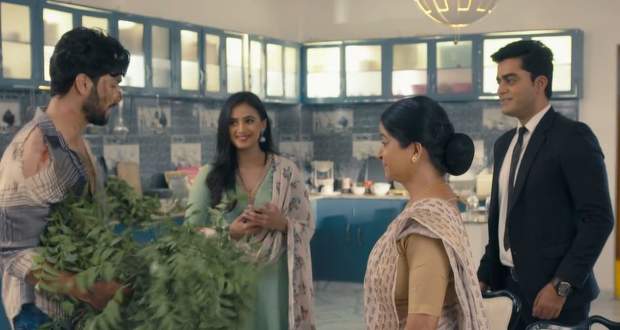 Today's Mehndi Hai Rachne Wali (MHRW) 12 May 2021 episode starts with Raghav coming home with Neem leaves while Farhad doesn't recognise him and tries to kick him out.

Jaya and Kirti also laugh at him while he goes to make the paste from Neem leaves.

Elsewhere, Sulochana locks all the kitchen drawers and demands Sharda to buy half of the ration if they want to eat.

Raghav demands the vault keys from Pallavi but she refuses through voice messages.

Kirti talks to her boyfriend, Sunny on a call about her family while Nikhil talks to someone on call.

Pallavi tells Raghav to give the keys to the person who comes to the house and it turns out to be Krishna.

She irritates him by calling him Jiju and takes the shop keys from him.

Sulochana reveals to Amruta that she wants to name the Deshmukh house to himself.

The inspector reveals to Raghav that Sulochana was the one who had sent police and pictures to Kirti's house.

Meanwhile, Kirti shouts at a reckless driver who kisses her cheek and leaves.

At night, Raghav thinks about the last moments and questions his decisions.