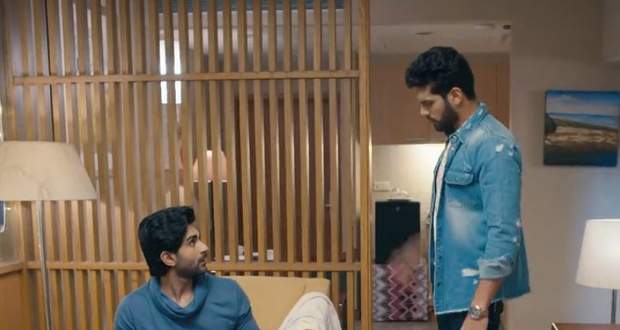 Today's Mehndi Hai Rachne Wali (MHRW) 14 June 2021 episode starts with Raghav confronting Sunny and telling him that he knows he was planning to elope with Kirti.

He reveals that he had gotten his phone tapped and found out about it through that.

Elsewhere, Kirti and Pallavi argue while she reveals that she knows his past but Keerti thinks that he is trying to gain sympathy.

Raghav tells Sunny to name a price for Kirti and he demands 5 crores which Raghav agrees and leaves saying that the cheque will reach him in some time.

Jaya wakes up and Kirti reveals that she is in love with Sunny and is going to live with him.

However, Jaya slaps her and rebukes her while Pallavi tries to stop them.

Raghav comes there and stops Kirti from leaving her and slaps her.

He asks Pallavi if she knew about the affair and she agrees making him upset.

He tells her that she's better as a friend and not a good wife in anger.

Elsewhere, Mansi finds out that Rahul is engaged to someone else and blames Pallavi for it.

Kirti argues with Pallavi and blames her for ruining her love life.