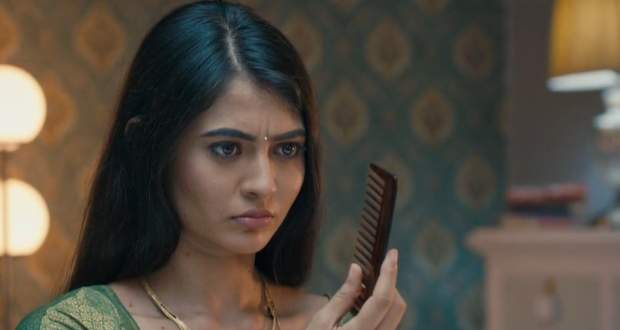 Today's Mehndi Hai Rachne Wali (MHRW) 14 May 2021 episode starts with Krishna telling Raghav that Nikhil has found out about the phone.

Elsewhere, the guy who kissed Kirti meets her and it turns out to be her boyfriend, Sunny.

He teases her and flirts with her. Raghav calls Sulochana and tells her that he wants to cast Amruta for the shooting of his new jewellery launch.

Raghav bickers with Pallavi and does her hair as she tells him to do.

She teases him and does drama while he reminds her that he is doing it all for Jaya.

He jokingly compares her to comb and runs away saying that he will call her 'Kangi' from now on.

She laughs saying that the 'Saadi Ka Dukan' nickname is much better.

Later, Raghav reveals to Jaya and Kirti that Sulochana is the one who had Jaya's picture's clicked which angers both of them.

Raghav informs them that he has a plan just as Sulochana and Amruta enters through the front doors.

Raghav confronts them and demands the reason while she feigns innocence.

The police force comes there and threatens to arrest them which makes Sulochana reveal her hate towards Raghav and Pallavi.

Raghav leaves saying that the police were fake while Jaya slaps Sulochana and kicks them out.