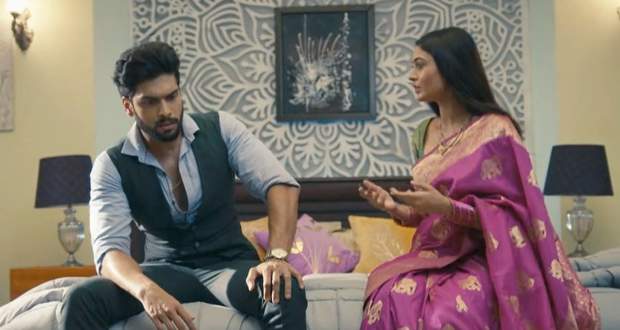 Today's Mehndi Hai Rachne Wali (MHRW) 15 May 2021 episode starts with Raghav remembering how he got defamed Pallavi and Sulochana accepting her plan.

He starts having an anxiety attack.

Pallavi comes to his room and starts trying to calm him down when she sees him suffering.

She helps him sit up and asks him if he has Asthma but he reveals to her that he is claustrophobic and gets anxiety attacks upon getting stressed.

She calls Sharda for her advice but Sharda behaves rudely with her.

Raghav thanks her but she says that it was just her humanity.

He blames himself for destroying Pallavi's life and thinks to fix his mistake.

Meanwhile, the police tell Vijay to stop selling his Sarees on the road while Sulochana tells Amruta to beat her.

Sulochana does a drama that Raghav and Pallavi beat her and threatened to turn the family against her.

Just then Raghav comes there and tells Vijay that he had falsely accused Pallavi due to a misunderstanding created by Sulochana.