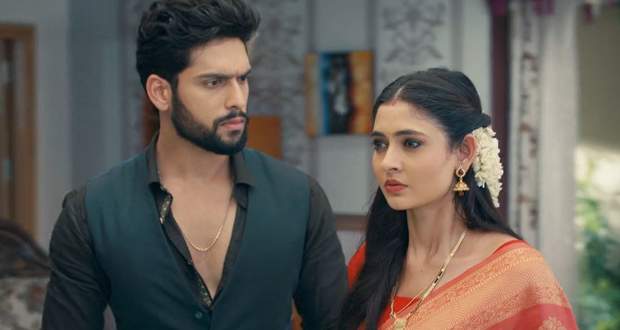 Kirti calls Rocky to ask about Sunny and he says that he doesn't know about Sunny's whereabouts.

Vijay insults Raghav and his family while telling him to wash his feet and drink the dirty water.

Raghav makes Vijay sit and is about to wash his feet while Pallavi comes there and kicks away.

She rebukes him for insulting Raghav and says that he is not worthy to even be a father-in-law.

She reveals that it was Sulochana who had stolen the necklace and framed him.

She says that only Sharda and Milind are her family and that she can come anytime she wants to meet them.

She says that no one can stop her and leaves with Raghav.

Pallavi angrily scolds Raghav and bumps into Kirti who again blames Raghav for Sunny running away.

Pahlavi scolds her also that Raghav is not the reason for all her troubles but Sunny who left her.

Raghav goes to see if Pallavi is okay while she shouts that she is angry.

She started crying and says that he has become her main priority.