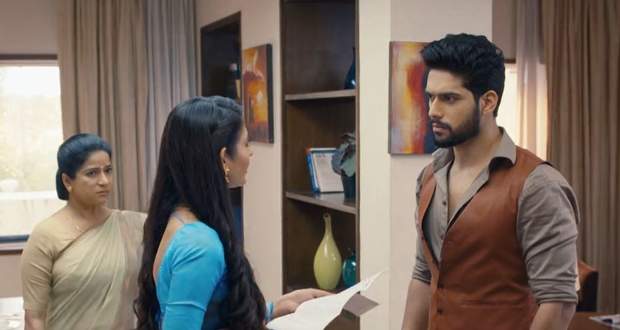 Today's Mehndi Hai Rachne Wali (MHRW) 17 June 2021 episode starts with Raghav promising Pallavi of not letting her get insulted by others and makes her rest.

Elsewhere, Jaya cries remembering Pallavi's words and says that Pallavi gave her his son back while holding onto Raghav's younger picture.

Meanwhile, Sulochana tries to manipulate Vijay but he tries to throw her out while Mansi stands up for her and insults Pallavi and Raghav.

Jaya goes to Raghav and apologises to her while he sheds tears as she asks him to accept her as his mother.

They share a hug and get emotional after which she reveals that Pallavi talked sense into her and made her realise her mistake.

She further talks to him about Pallavi and tells him that he should be free from the forced marriage which makes him wonder.

She tells him to let her go to Kolhapur as it is her right to be happy.

He admires a sleeping Pallavi and goes out while she wakes up and wonders what happened.

© Copyright tellybest.com, 2020, 2021. All Rights Reserved. Unauthorized use and/or duplication of any material from tellybest.com without written permission is strictly prohibited.
Cached Saved on: Friday 23rd of July 2021 09:50:51 PM