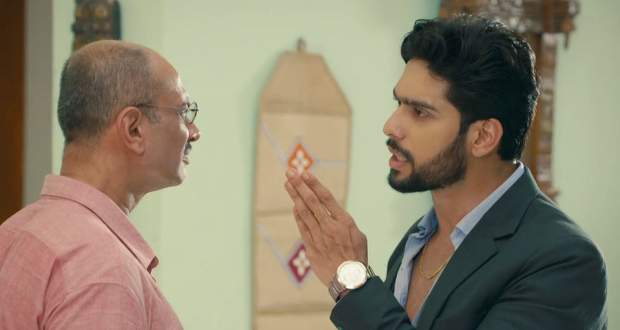 Today's Mehndi Hai Rachne Wali (MHRW) 17 May 2021 episode starts with Raghav showing the video of Sulochana's confession to Vijay and proving that Pallavi is innocent.

However, Vijay says that it is not true as Pallavi proved them wrong by marrying him.

He further accuses Raghav of beating Sulochana while Raghav leaves saying that they don't deserve Pallavi who would die for her family.

Raghav talks to his consciousness on the way back who tells him to be true to Pallavi and reveal her family's deeds to her.

Raghav tells everything to Pallavi and reveals how Vijay refused to believe her and trusted Sulochana.

However, Pallavi makes him understand the damage done to her life due to his actions and says that he took away her family from her.

He tells her that only he is not at fault because her family kicked her out based on a lie told by a stranger.

He tells her to leave her family and she slaps him in anger.

She has an emotional breakdown and tells him to kill her.

© Copyright tellybest.com, 2020, 2021. All Rights Reserved. Unauthorized use and/or duplication of any material from tellybest.com without written permission is strictly prohibited.
Cached Saved on: Tuesday 28th of September 2021 12:33:11 AM