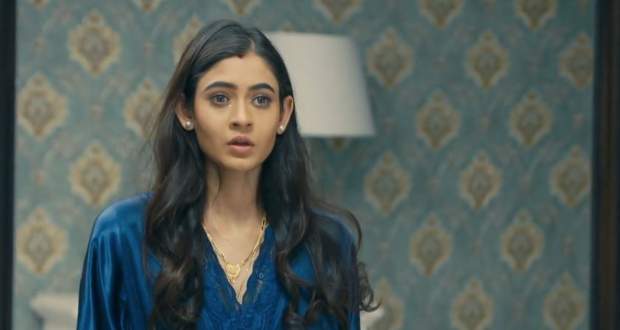 Today's Mehndi Hai Rachne Wali (MHRW) 19 May 2021 episode starts with Pallavi waking up and having a breakdown seeing her and Sharda's picture.

She talks to herself and manages to calm down thinking about what is she doing for the past few days.

Jaya makes her sit for breakfast while Raghav comes there with Marathi food for her and tries to serve her but she leaves.

Meanwhile, Sulochana tries to convince Vijay for getting a loan to get a new shop while Sharda is against the decision.

However, Vijay leaves saying he knows what he can do while Sulochana taunts Sharda.

Elsewhere, Kirti and Sunny flirt with each other but he avoids the topic of marriage.

Raghav brings Saree making materials for Pallavi but she still stays ignorant of him.

Just then, a servant comes there and gives him a courier.

Raghav opens it to see that it is a ticket named to Pallavi and she comes downstairs saying that she is leaving for Kolhapur.

© Copyright tellybest.com, 2020, 2021. All Rights Reserved. Unauthorized use and/or duplication of any material from tellybest.com without written permission is strictly prohibited.
Cached Saved on: Thursday 27th of January 2022 02:16:32 PM