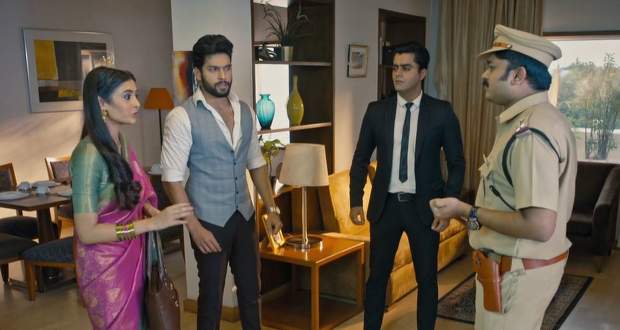 Meanwhile, Raghav informs the same to Pallavi who starts getting anxious and he hugs her to stop her from leaving.

Elsewhere, Sunny and Kirti argue on the call regarding the tattoo dilemma and he tells her to leave him.

Pallavi starts arguing with Raghav and leaves while security informs her that the cars are not available.

Raghav offers to take her along with him to the police station but she denies it.

He takes her with him after covering her mouth and lifting her over his shoulder.

Meanwhile, Sunny reads his friend’s messages and gets confused reading the cryptic message.

Raghav takes Pallavi to meet Sharda and they reunite while he assures her that his lawyer is working to get Vijay out.

Raghav gets a call and leaves while he bumps into the person who put the necklace in Vijay's bag.

Later, Farhad suggests Raghav that he can accept that he forgot he had given the necklace to Vijay and that there was no stealing.

Raghav accepts the plan and signs on the document stating the same.

© Copyright tellybest.com, 2020, 2021. All Rights Reserved. Unauthorized use and/or duplication of any material from tellybest.com without written permission is strictly prohibited.
Cached Saved on: Wednesday 22nd of September 2021 10:31:34 PM