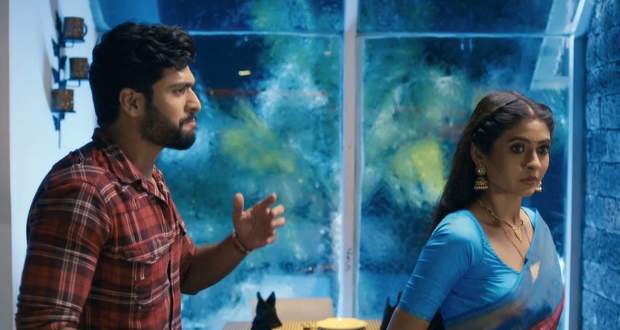 He tells Pallavi that he is sorry and requests to give her a chance to be a good friend of her.

He tells her that he will try to give her the same happiness that her family gave her but she doesn't believe him.

However, he tells her that he will change for her and that she will be his first priority.

He tells her that he will be willingly divorcing her after 31 days if he can't bring back her happiness but she ignores him.

He requests her to give him a chance for her first husband's sake while she looks on.

Elsewhere, Sulochana tells Amruta her plan in detail of getting the house.

Jaya gets upset seeing only Raghav but gets delighted seeing Pallavi calling out to her.

Later, Pallavi tells Raghav that she is going to give him a chance only because he gave a change in the past.

However, she gets surprised when he apologises to her and thank her for giving him a chance.

He overhears Pallavi telling Jaya that she came back to give Raghav a chance at becoming a better person and gets emotional.

© Copyright tellybest.com, 2020, 2021. All Rights Reserved. Unauthorized use and/or duplication of any material from tellybest.com without written permission is strictly prohibited.
Cached Saved on: Monday 17th of January 2022 09:45:28 AM