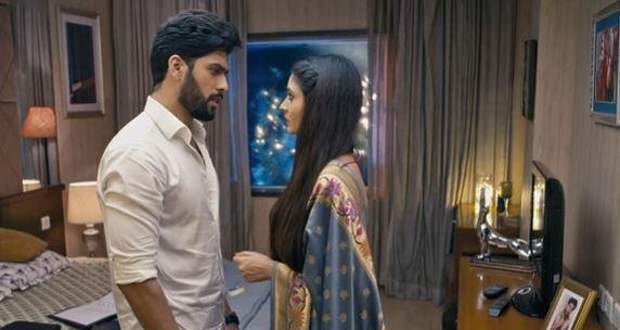 He goes while Pallavi tells Jaya that she will wear the Saree Raghav gifted her for the fast function.

Meanwhile, Lion/Vedant manages to guilt-trip Sunny to letting him stay there while lying that his name is Sher Singh.

Elsewhere, Sharda tells Vijay that she will meet Pallavi and that he can kick her out of the house just like how he threatened his brother, Milind.

Raghav and Pallavi talk and he tells her to keep the Vat Savitri Vrat only if she feels something for him.

Pallavi accidentally tears Raghav's shirt while Farhad comes there and misunderstands the situation.

Later, Sharda calls Pallavi and tells her to meet her outside.

Vedant sees Pallavi and Sharda together and wonders what relation does Pallavi has with Mandar's mother.

Pallavi talks about Raghav with Sharda who advises her to start a new beginning with him.

Later, Vedant follows Sharda but falls due to leg injury and wonders if Pallavi knows about Mandar and Raghav's connection.

© Copyright tellybest.com, 2020, 2021. All Rights Reserved. Unauthorized use and/or duplication of any material from tellybest.com without written permission is strictly prohibited.
Cached Saved on: Monday 17th of January 2022 08:58:20 PM