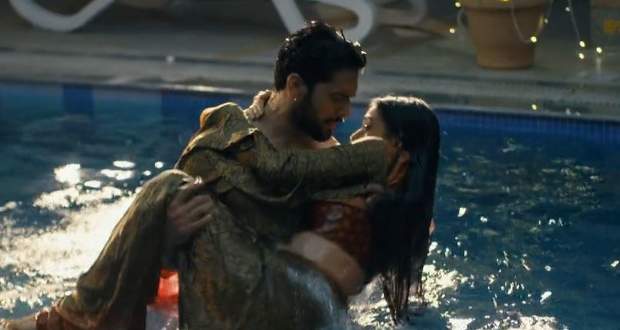 Today's Mehndi Hai Rachne Wali (MHRW) 25 May 2021 episode starts with Pallavi talking to Krishna on call while she gets shocked seeing Raghav in the swimming pool.

She asks him if he found out anything about her family's problem but he refuses to answer her.

She falls into the pool and Raghav saves her.

He scolds her for being careless and informs her that the Deshmukh house has been sealed as the property tax was not paid.

Elsewhere, Vijay fights with Sharda and tells her to give him poison before taking help from Raghav and Pallavi.

Jaya finds out about Raghav and Pallavi both being in the pool together and forms a plan to unite them while Raghav teases Pallavi.

Jaya tells Farhad to act as a pest controller and spray the medicine in all the rooms so that Raghav and Pallavi can stay together in the guest room.

Meanwhile, Milind sees Amruta going at midnight and gets curious.

Jaya's plans work successfully and Raghav feels happy as Pallavi blabbers on his bad habits and takes care of him.

© Copyright tellybest.com, 2020, 2021. All Rights Reserved. Unauthorized use and/or duplication of any material from tellybest.com without written permission is strictly prohibited.
Cached Saved on: Wednesday 13th of October 2021 10:32:27 AMCached Disp on: Thursday 21st of October 2021 07:38:18 PM