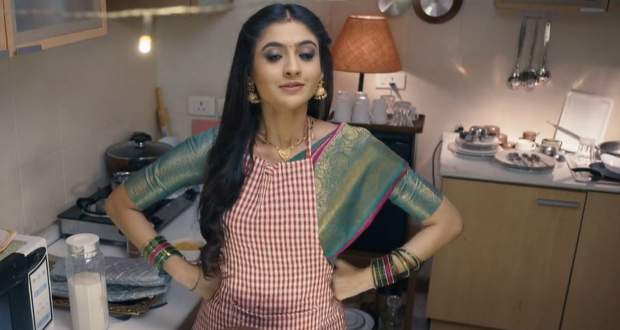 Meanwhile, Sharda reads an envelope addressed to her and says that Pallavi is dumb.

Meanwhile, Pallavi decides to make something for Raghav to thank him and takes advice from Farhad who tells her that Raghav likes protein cake.

Elsewhere, Milind tries to convince Sharda to not assume Pallavi as the bad guy after reading just a letter.

Later, Sunny tries to talk to Kirti who behaves rudely with him and he leaves saying that she became egoistic after living with his rich brother.

She reaches home and Raghav takes her to his office and tells her to choose any of the necklaces she likes as a gift for her birthday.

However, she vents out her anger on him by insulting him and he slaps her.

Later, Kirti cries in Jaya's arms and tells her that she doesn't want to stay there while Jaya tells her about the necklace incident and that she suspects Raghav did it all.

Meanwhile, Raghav comes to his room drunk which panics Pallavi while he talks about her not talking to him as he is a bad guy and throws his jacket on the cake.