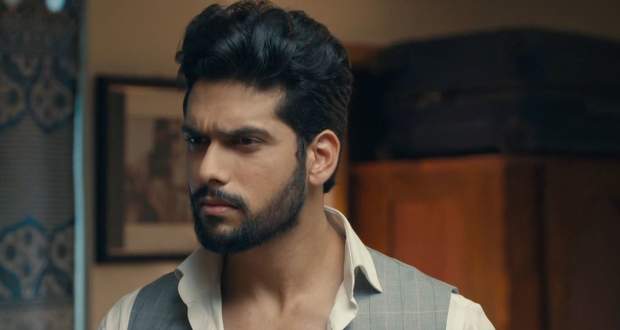 Today's Mehndi Hai Rachne Wali (MHRW) 31 May 2021 episode starts with Jaya informing Pallavi that she wants to get a tattoo of Kirti's name done in her hand as a gift for Kirti's upcoming birthday.

Jaya reveals to Pallavi that she got the appointment at Sunny studio in her name and requests her to come along as they will have to go to his house for the tattoo.

Meanwhile, Vijay stands on the footpath selling Sarees while someone keeps an eye on him.

Sunny welcomes Jaya and Pallavi nervously while he gets even more nervous finding out that Jaya wants the tattoo.

Raghav helps Sharda with housework but leaves after getting a call while Sunny accidentally writes Raghu instead of Raghav which angers Jaya.

Meanwhile, Raghav gets angry at his employees for losing the necklace and tells them to find it at any cost.

Pallavi asks Jaya about Raghav's past but gets a call of the order from the Nawab family and gets distracted.

Someone calls the police after which the police check Vijay's bags and finds the stolen necklace and inform about it to Raghav.

Raghav gets shocked while Pallavi arrives there with flowers for him.

© Copyright tellybest.com, 2020, 2021. All Rights Reserved. Unauthorized use and/or duplication of any material from tellybest.com without written permission is strictly prohibited.
Cached Saved on: Tuesday 28th of September 2021 01:43:30 AM