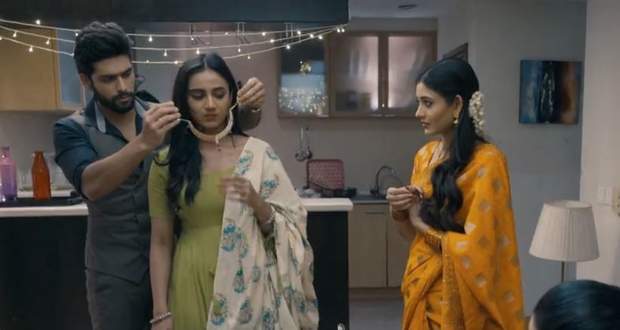 She tells Rocky to call an Ambulance while Sunny stands up beside her and surprises her and they patch up.

Meanwhile, Raghav shows the necklace he designed for Kirti to Pallavi and tells her to give it to Kirti the next day.

However, she refuses and tells him to give it to her only.

The next morning, Raghav is telling his employees from the jubilee hill show to be careful next time while Sunny comes there.

He recognises one of the employees as the girl who Rocky took the diamond necklace for and questions her.

Pallavi notices it while the girl leaves in a hurry refusing to be the girl Sunny is talking about.

Sunny does drama and manages to give the Gold chain and pendant to Kirti.

Pallavi follows him out and asks him about the employee while Sunny informs her what he knows.

She requests to meet Rocky and Sunny agrees asking for her contact number.

Later, Pallavi gifts the necklace to Kirti and does drama to make Raghav put the necklace around Kirti's neck.

© Copyright tellybest.com, 2020, 2021. All Rights Reserved. Unauthorized use and/or duplication of any material from tellybest.com without written permission is strictly prohibited.
Cached Saved on: Sunday 2nd of October 2022 02:07:13 AMCached Disp on: Friday 7th of October 2022 03:19:20 PM