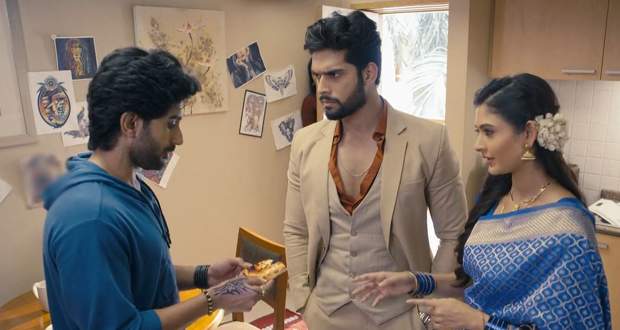 Today's Mehndi Hai Rachne Wali (MHRW) 9 June 2021 episode starts with Pallavi telling Raghav that he doesn't need to stay there and she doesn't want to reunite with her family by killing his self-respect.

Afterward, Pallavi meets Abdul there who informs her about Sulochana getting a disguise from his shop for the fancy party at their house.

Pallavi and Raghav think that Sulochana is framing him.

At home, Raghav says that they can't confront Sulochana as they don't have proof while Pallavi gets an idea.

Elsewhere, Kirti and Sunny are romancing while Raghav and Pallavi come there.

Kirti hides behind the door while Raghav and Pallavi come inside and request him to sketch a beard and mustache on Sulochana's picture and ask Rocky if she is the person he met.

He lies about not having a sketcher and goes out while taking Kirti with her discreetly.

Later, Sunny messages Pallavi that Rocky confirms Sulochana being the culprit while they get stressed.

They think of how to expose her while Raghav says that he will send Sulochana to jail.

However, Pallavi refuses to say that Milind will be rebuked by society and they argue.

However, they later think of each other's words and think that the other person is correct.