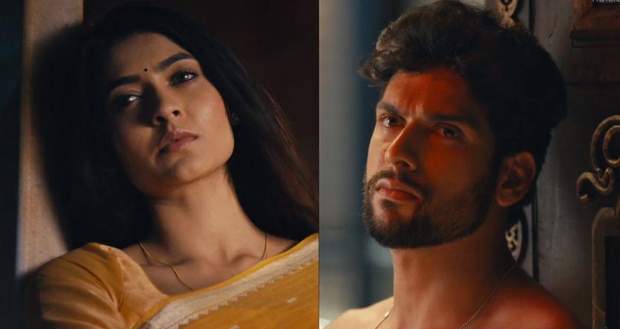 Krishna tries to look for the appropriate colour but she doesn't find which disappoints the customer.

Pallavi comes running towards the shop but her sandal gets broken on the way.

They decide that they must go to another shop that might be opened at this point in time at night.

Pallavi gives purple saree to customers which they like the most and they ask her who are you to which Pallavi replies that she is Pallavi Deshmukh.

They ask her that she is not Telugu, she says no she is a Maharashtrian and she is handling her Baba’s shop.

Customer care gets inquisitive that she went to her home just for getting a saree to which Pallavi explains that a customer’s satisfaction is of utmost importance to them.

She is following her baba’s principle that it is not just the saree, it's an attire that represents the personality of an Indian woman.

This saree will represent her by matching saree’s colour with that of her daughter’s at tomorrow's function.

They bless her and leave the shop.

Pallavi sees rain outside, she goes to enjoy the rain while Krishna closes the shop after getting a call from Sharda.

Krishna proposes that they must go to her house till the rain stops.

Krishna goes for changing the saree while her mother gives Pallavi a white colour saree to wear.

Pallavi gets shocked but Krishna's mother explains that she must follow society's customs and a widow must wear a white colour saree.

Pallavi says that she respects her decisions, she is thankful that she is helping her and she has her own reasons for not wearing a red colour saree.

Raghav is in a car with a girl, she says that he is a hot guy, in contrast, he says she is not hot, she is just here for his money, and the girl replies she likes his attitude.

A small girl sees Pallavi coming and is about to give Kumkum to her but when light falls on Pallavi the girl hides her kumkum while Raghav’s car stops all of a sudden.

Raghav’s driver sees what's the problem with the car while that small girl runs towards Raghav and tells him he will get married to a nice girl if he purchases that Sindoor.

He gives her more money than required and tells her to enjoy it while Raghav’s friend questions him that he doesn’t love her but purchased Sindoor for her.

Raghav exclaims that she is not a marriage type girl and throws the Sindoor which falls on Pallavi’s clothes.

Pallavi remains stunned over there while Raghav moves away in the car.

Raghav’s friend requests him to stay with him that night, but Raghav says that she is done with dinner and wine, what else does she want.

She says she loves him but he says angrily that love is very pure and dangerous.

Raghav says a girl who can spend a night with him just because of his money, she is not worth love and tells her to get out of the car while she says that he is very disgusting.

Pallavi reaches home and Sharda scolds her for coming late and asks her why she is wearing a white-coloured Saree.

Pallavi explains that Krishna’s mother gives her to wear so, to which Sharda is about to call Krishna for taking her out of the job but Pallavi takes her phone.

Sharda says humorously that which daughter-in-law doesn't agree with her mother-in-law which makes Pallavi sad and says that she will not help her and do other chores like other daughters-in-law.

Meanwhile, Raghav sees a girl moving alone on the road and tells her to sit in her car but she doesn't agree and keeps on moving.

Raghav holds her by her hand while a group of boys come from behind in the car and tell him to leave the girl as it's their job to tease her, not him.

Raghav ignores them while they throw sticks on Raghav, to which Raghav fights with them and the girl leaves in the auto.

Further, Sharda and Pallavi start crying and Sharda says lovingly that she is like a daughter and wants her to be happy and wear different colour Sarees.

Sharda wishes Pallavi to move on, thinks that she knows how much she misses Mandar and vows to herself that she'll find a nice match for him.

Pallavi is trying to wash her red colour on her saree but finds it strange a little colour still remains.

Later, Raghav reaches home and makes a drink for himself.

© Copyright tellybest.com, 2020, 2021. All Rights Reserved. Unauthorized use and/or duplication of any material from tellybest.com without written permission is strictly prohibited.
Cached Saved on: Friday 30th of July 2021 12:37:48 PM