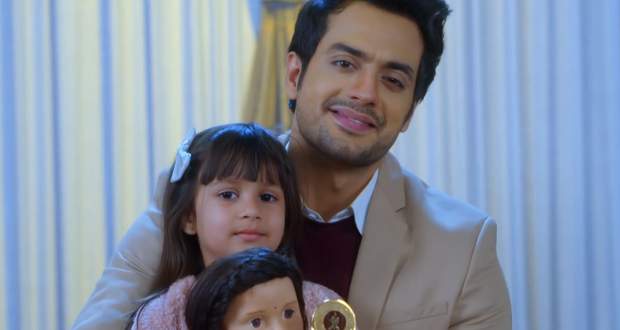 Today's Meri Gudiya 11 Jan episode starts with Raghav thanking everyone for receiving the award. He gives the credit for the award to his daughter and his wife.

Raghav explains why he has brought Avi in the conference. He misses his wife Madhuri and says Avi is Madhuri’s shadow. He says the award belongs to Madhuri and Avi.

Ratri wishes to clear Madhuri’s name forever. Raghav says he has gained more projects after Avi’s arrival in his life and she is everything to him.

The chief guests give the award to Raghav and his hand continues to twitch. Later, Ratri introduces Raghav to her brother-in-law Dr. Rudraksh.

Avi asks Raghav to not stay there while Ratri says they can meet at dinner. Raghav takes Avi in a room to rest while she gives him three stars for the speech.

Ratri again meets Raghav and enquires why he is not swimming. Ratri wants to get close to Raghav and asks his help with her bracelet.

Avi comes and helps Ratri instead and asks Raghav to come with her for lunch. The doll Pari tears Ratri’s dress to keep her away from Raghav.

Rudraksh calls Adrika and wishes to bring the invisible force out in the open.

© Copyright tellybest.com, 2018 & 2019. All Rights Reserved. Unauthorized use and/or duplication of this material without written permission from tellybest.com is strictly prohibited.
Cached Saved on: Monday 6th of April 2020 07:38:29 PM