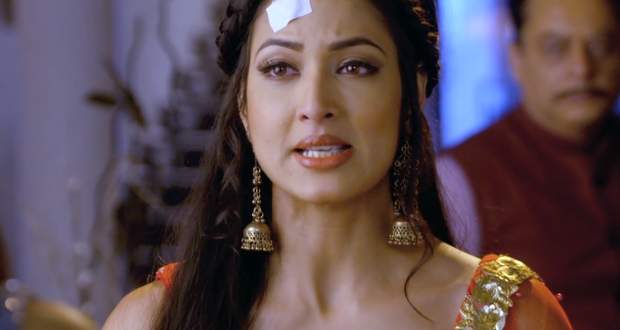 Today's Meri Gudiya 15 Feb episode starts with Madhuri walking among people wearing white. Guruji declares that he needs to sacrifice the body for the betterment of the world.

Madhuri meets Dharamraj who keeps the account of good and bad. Madhuri wants to return but Dharamraj refuses to agree to her. Guruji arrives at the same time to know the destiny.

Meanwhile, Ratri wishes to speak the truth while Adrika tries stooping her. Raghav wants to know the truth while Ratri reveals that she didn’t know what to do in her life.

She met Dr. Rudraksha and felt powerful after learning magic. She says she got addicted to the power and that he wanted the soul of Avi to gain something.

Ratri says she requested forgiveness but she was also under his spell and did as he said. She further says she tried to take Madhuri’s place.

Guruji tells Dharamraj that Avi needs to live and along with her Madhuri need to stay alive. Elsewhere, Ratri says she felt a motherly connection with Avi and that’s why she didn’t want to hurt her.

She says she started saving Avi and therefore decided to get her safely home. Ratri decides to leave the house while Daadi stops her from going.

She wants Ratri to stay as Raghav’s wife and Avi’s mother forever. Meanwhile, Madhuri requests to let her go and save her daughter, Avi. Guruji says Madhuri will go back on earth. Guruji tells Madhuri that she will go back to her body.

Upcoming Meri Gudiya episode update: Madhuri has to go through a test before returning to Avi’s life.

© Copyright tellybest.com, 2018 & 2019. All Rights Reserved. Unauthorized use and/or duplication of this material without written permission from tellybest.com is strictly prohibited.
Cached Saved on: Monday 17th of February 2020 07:23:46 PMCached Disp on: Friday 21st of February 2020 12:41:24 PM