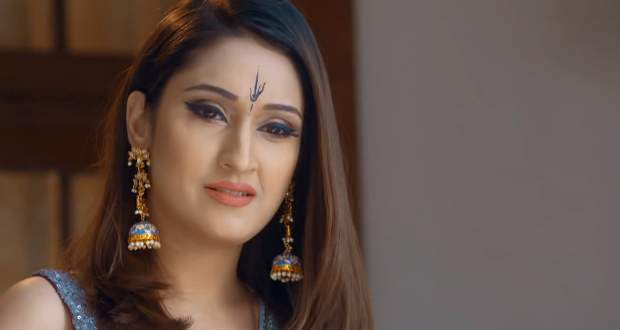 Today's Meri Gudiya 25 Jan episode starts with Ratri pushing away Avi while searching the ring. Avi offers to help her but she denies. The doll pushes the candle on Ratri’s hand.

Dadi asks Turanta to call Raghav and says she will arrange another ring. Dadi is upset about Ratri’s wound while Madhuri in the doll knows she is there to harm them.

Dadi says the engagement can’t take place and they will proceed with the ritual on their marriage. Madhuri in the doll is adamant to break the marriage.

Ratri gets upset while Madhuri puts the ring in Adrika’s bag. Later, Adrika offers tissue to Ratri and the ring falls off from her bag.

Ratri gets angry at Adrika and destroys her own room. Meanwhile, Dadi worries about the obstacles in the marriage and decides to go to some Guruji.

Adrika decides to follow and find out about Dadi’s Guruji. She sits in the boot of the car. Meanwhile, Avi wants to talk to her father while later she seeks help from Ratri.

Ratri refuses to help her while Avi offers to put medicine in her hand. Later, Dadi meets Guruji and learns her Maun Vrat was protecting Avi. Guruji promises to give a hint about the evil powers surrounding Avi.

© Copyright tellybest.com, 2018 & 2019. All Rights Reserved. Unauthorized use and/or duplication of this material without written permission from tellybest.com is strictly prohibited.
Cached Saved on: Thursday 30th of January 2020 04:10:40 PMCached Disp on: Monday 17th of February 2020 01:25:20 PM