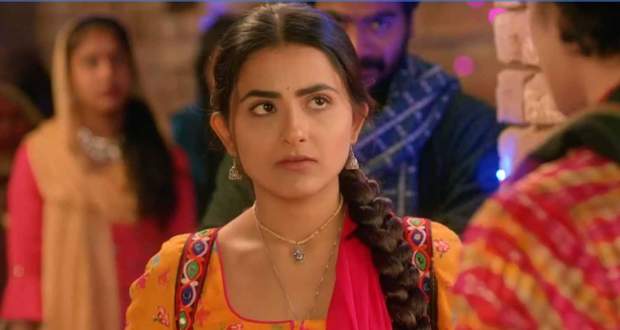 Today's Mithai 11th April 2022 episode starts with Mithai approaching Siddharth with a tray full of prasad after serving everyone else. When Siddharth ignores her, Mithai comments that she was unaware of his hearing problem.

Getting furious at this, Siddharth commands Mithai to shut up. Siddharth approaches Mithai and takes the tulsi leaf.

Mithai promises to feed Siddharth sweets before she leaves.

Meanwhile, Shaurya surprises Mithai by showing her an article that reads her name as the winner of the sweets competition which elates Mithai.

Girish is furious at alternate news showcasing the loss in the competition of Harimohan Sweets and he storms off after an argument with Harimohan.

Geetika informs Harimohan and everyone that Kavita's In-laws wish to ask for Karishma's hand in marriage for their younger son Rohan.

Harimohan gets upset at the urgency to marry Karishma off.

On the other hand, Chandrakanta finds it odd to marry Karishma before Kirti. Kirti explains that she wishes to pursue her education before marriage.

Geetika prepares green tea for Siddharth while Mithai is perplexed at the alienness of the drink.

Harimohan offers Mithai the tea and everyone is ecstatic at the disgusted look on Mithai's face.

Mithai volunteers to fix the bitter green tea with milk and sugar.

However, Siddharth views Mithai's actions and tells her not to touch his things.

Indu comes back from the temple and asks for permission to leave.

Just as they are about to leave, their path is blocked by Bhura.

Bhura enters the Choubey house and commands Mithai to leave with him. As Bhura is about to drag Mithai out of the house, Siddharth yanks his handoff.

Mithai promises to pay Bhura back her reward money while Bhura leaves in anger.

As Mithai is about to leave, Harimohan asks her to stay till Holi at least which Girish contradicts.

© Copyright tellybest.com, 2020, 2021. All Rights Reserved. Unauthorized use and/or duplication of any material from tellybest.com without written permission is strictly prohibited.
Cached Saved on: Saturday 28th of May 2022 06:18:10 PM